Conference Series Ltd invites all the participants across the globe to attend 24th World Congress on Pharmacology Vienna, Austria.

Karen Mulkijanyan is the Head of the Department of Pharmacology at Tbilisi State Medical University Institute of Pharmacochemistry and Adviser on Technology Commercialization to aforesaid Institute’s Administration. He obtained his MS in Biochemistry in 1981 and PhD in Pharmacy in 2005. Dr. Mulkijanyan’s research interests include studying the pharmacology of anti-inflammatory and wound healing drugs and analysis and prediction of structure-activity relationship of natural, modified and synthesized compounds. He is the author and co-author of more than 90 papers in peer-reviewed journals, about 30 presentations at international scientific meetings, and 2 patents.

vasoactive anti-inflammatory drugs free of unwanted side effects that characterize the majority of currently available corticosteroids and NSAIDs.

Assessment of the specific anti-inflammatory activity of RE on "granuloma pouch" model revealed that it caused statistically significant (р <0.001) difference both in exudate volume and mass of dried granuloma. Further investigation on the formalin-induced rat paw edema confirmed the anti-exudative activity of RE. As the observed effect can be conditioned by several reasons including the change in the diameter of blood vessels, stimulation of a-adrenoreceptors or blocking the release of histamine and bradykinin, more detailed study of the mechanism of action of RE, a series of experiments were conducted, using vital dyes Evans blue (EB) and sodium fluorescein (SF). In intact animals SF after intravenous administration rapidly permeates into all organ tissues in contrast with EB, which does not leave the blood vessels.

Subcutaneous administration of SF and EB on the background of adrenalin or histamine altered the shape of SF pharmacokinetic curve reflecting the vasotropic effects of the agents, whereas for EB it remains unchanged. RE does not change the Tmax of SF, but the concentration of the dye increases. No alterations are observed for EB.

In in situ experiments it was found RE causes the constriction of the mice mesenteric vessels along with increased blood flow. Moreover, RE neutralizes effects of histamine, probably due to stimulation of α1-adrenoceptors.

Finally, it was found, that both prazosin (a1-blocker) and diltiazem (Ca2+ channel blocker) decrease the contractility of isolated femoral vein rings caused by RE, suggesting that observed vasotropic effects of RE are mediated by stimulation of vascular adrenoreceptors along with the simultaneous increase of Ca2+ in vascular endothelium.

Assessment of safety of RE in chronic 90-day experiment revealed the absence of any toxic effects on major systems.

Summarizing the obtained data, it may be concluded that the studied RE can be considered as prospective candidate for the development of anti-inflammatory vasoactive remedy free of toxic/side effects.

University of The Sciences, USA 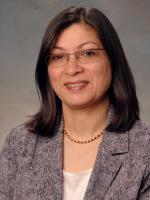 Shanaz Tejani-Butt is a Professor in the department of Pharmacology and Toxicology at the University of the Sciences in Philadelphia.  Dr. Tejani-Butt’s research interests include the neurobiological mechanisms associated with the regulation of biogenic amines in an animal model of depressive behavior, implications of these biogenic amines in modulating stress and reward, and therapeutic action of psychiatric drugs. Dr. Tejani-Butt has been a recipient of numerous research grants, and served as a Grant Reviewer for the National Institute of Health.  Shanaz Tejani-Butt received her PhD in Medicinal Chemistry from the Medical College of Virginia, her MS in Organic & Natural Product Chemistry and BS in Chemistry and Microbiology from the University of Bombay.  She received her MBA degree in Healthcare Business from the Mayes College of the University of the Sciences.

According to the World Health Organization, mental disorders are one of the leading causes of disability in the US and worldwide.  However, several challenges exists in the treatment of these disorders.  First of all, diagnosis is difficult, especially in the young and the elderly, and the course of the disease can get complicated when the patient suffers from additional chronic conditions.  Secondly, even when appropriate medications exists, a large number of patients do not receive treatment or are found to be treatment resistant.  Thirdly, the neurochemical basis underlying the pathophysiology of the disorders is not well known, and our current understanding of these disorders is largely based on animal models.

Exposure to stress triggers a complex array of physiological, behavioral and neurochemical processes in order to promote homeostatic adaptation to the stressful stimuli.  Repeated and chronic stressors pose a risk for psychiatric ailments, affecting our daily performance, and leading to a high public health burden.  Appropriate animal models are therefore required for exploring the underlying neural mechanisms of stress, and for the screening of new therapeutic agents.